New in this forum I hope somebody can help me with solving problem. I checked few topics here. none of my HFE will boot.

I owned a brandnew HXC Floppy Emulator Rev F SD card. Using in a compatible 8088 Carry I PC. He has two disks a´ 720k. One of them (a:\) I interchanged with the HXC. I have read the manual(s). Hardware setup is hopefully correct: Power ok, floppy interface connection with twisted floppy ribbon, Emulator is set to ID1A=on, ID0A=off. Formatted SD card FAT 32.

BIOS of the Carry PC count up to 640k, floppy access LED is working, then also for 1 second the card access LED. But then nothing happens, except for 5...10 seconds card access LED lights again. Then appears message "Drive not ready in A: Press any key....." . Pressing right ("next") button on HXC I can see the generated HFE on SD card shown by alphanumeric backlight LCD, but pressing any key on keyboard makes no effect.

I am helpless.
Somebody here to give me a brainstorming? Thx,

Maybe this XT / 8088 use another interface setting ?

Can you read on the emulator screen ? (a picture please).

(The bootloader can be a bit picky about the sdcard content : To update the firmware you should use a "freshly" formatted sdcard).
HxC Floppy Emulators website
Top

thx for answering.
Because I´m not so very familiar with old 8088 - what do you mean with "another interface setting"? Can you explain pls?
This 8088 is booting well with his two 3,5´´ floppies: BIOS starts with typical "ticking" up to 640k, then access to floppy a:\, heard ticking and loading DOS 3.3. No problems. Both floppies a:\ and b:\ are working fine.

Now I´ve interchanged a:\ with Emulator. Tried standalone Emulator/together with floppy b:\, another ribbon/untwisted ribbon with ID2A...nothing works.

And yes, I´ve used a freshly formatted SD card to update firmware. By the way: can I check version of firmware on emulator?
And yes, I can read Emulator screen : it shows name of the HFE file. If necessary I can change files with emulator button. 10 sec light on but no effect. no counting up. Screen shows something like "T:000/80 S:0". No changing, no upcounting of T:. As I´m supposing while access "ticking" must be heard if upcounting T:, but nothing heard.
Of course I´ll post pic of the screen - but maybe you can answer again? Thx for that,

Yes : remove the sdcard and press the select button. There is a menu to read the version : 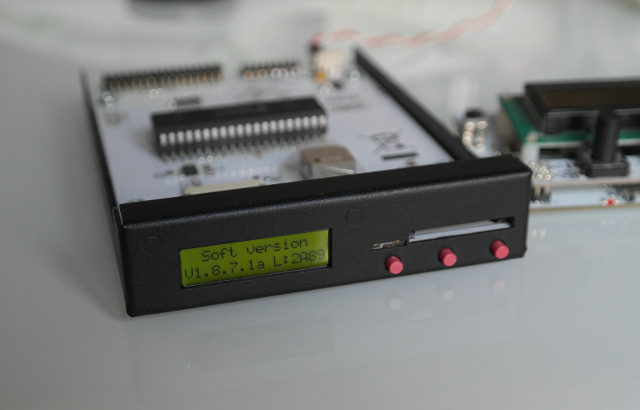 About the update : what is the error code (led blink code) ?
HxC Floppy Emulators website
Top

For the drive troubleshooting :

Ok got the image, thanks. The problem is probably related to the way this image was created : It has a MSWIN4.1 (Windows 95) boot sector. I am not sure that this boot sector is compatible with the dos version and the 8088 machine you are using. (EDIT : No, i am sure now : the MSWIN4.1 boot sector is looking for the IO.SYS file, not present in the IBM DOS...) I suppose that you have created this image with the hxc software dos disk browser ?
Have you a *.IMG/*.IMD/*.DSK image of this boot disk ?
HxC Floppy Emulators website
Top

You must have/use a boot image with the right bootsector : Why are you trying to use this specific dos files ?
Have you the boot floppy disk ?
Can't the standard MS DOS img be used with this machine ? :
https://winworldpc.com/product/ms-dos/320
HxC Floppy Emulators website
Top

Can't the standard MS DOS img be used with this machine ? :
https://winworldpc.com/product/ms-dos/320

Which switch I have to use for booting automatic? (at the moment I have to press emulator button, choose *.hfe, then starting)
Again: GREAT!!! Thanks alot for your assistance and understanding.

Eckhard wrote: ↑
Fri Feb 26, 2021 6:19 pm
Which switch I have to use for booting automatic? (at the moment I have to press emulator button, choose *.hfe, then starting)

You mean on the emulator ? The last selected image should be reloaded automatically at power up.

Jeff,
is it possible to change switches in software HxCFloppyEmulator_Emulator settings to catch booting without pressing buttons on Emulator?
Can I create subdirectories on SD Card - one sub for one Operating system, e.g. DOS3 / 6.22 / 3,5´´/ 5.25´´/.../? Working?
Regards
Eckhard
Top

I don't understand. This is the default behaviour. the last selected/loaded image is loaded at power up.
You can also use the "STARTUPA.HFE" feature : rename your boot image to "STARTUPA.HFE" and use the attached config file.

Return to “PC and compatible support”