Of all the disk images I've found on the net or that people sent me (hundreds), only 5 work after I converted them to HFE format withe the HxCFloppyEmulator program.
These 5 disks really work well. I can see the content and launch programs. They work fine.

But I'm having problems with all other disks. What I'm doing wrong ?
I thought that by converting them in HFE format and it will be ok, but apparently not.
Can someone help me on this ?
Top

There are two directories.
One with a HFE working.
And another one with some of the HFE not working, and sources when I had them.

Thanks for your help.
Top

Sound to be a bitrate setting issue, but are you sure that xmodem.hfe is working ?

You can try right now to force the bitrate to 250000 in the embedded menu.
HxC Floppy Emulators website
Top

Your are right xmodem.hfe is not working either.

I chose a bitrate of 25K in the embeded menu but it doesn't work either...
When I try to DIR thoses disks, nothing happen... whereas the others work fine...

Could it be related to this :
"Keep in mind when exploring other disk images a SSDD booted disk will not read DSDD disks swapped in."
This sentence was found here : https://www.reddit.com/r/vintagecomputi ... k/fx2qzk3/

Is the attached image working ?

(bitrate is still forced to 25k)

Thanks for any further help.
I would really love to read the other disks
Top

I don't know why, but it seems that the machine is trying to read the opposite side (S:1) for some reasons in your video.
Just to try i have swapped the sides in the attached image.

Sadly it doesn't work either...
The only difference is the Gotek making more noise (I have piezzo mod), trying to read track 1 and 0 on and on....
Top

Ok so the issue is : All these single sided disks don't work while double sided images work perfectly.

I see 2 possibilities :
-> these imd are bad. (double sided disks dumped as single sided disk...)
or
-> there is an issue in the pc hxc software.

I need to load them in ImageDisk to compare with the HxC tool.
HxC Floppy Emulators website
Top


Some Kaypro II units—probably the earliest ones—have the 81-110 mainboard, which lacks the connection of the side-select signal and so can only control single-sided drives. Other Kaypro II units have the 81-240 mainboard: this is the same board used in the Kaypro 4, so it has that signal connected and can support double-sided drives. However, the Kaypro II and Kaypro 4, which have no equipment differences other than the installed floppy disk drives, also had different monitor ROM versions (as of Sept. 1985), so it might be necessary to replace that ROM at the same time double-sided drives are installed in the Kaypro II, effectively completing its conversion to a Kaypro 4 (except for the exterior finish). In the 1980s, the Kaypro 4 ROM could have been bought from Kaypro. In the 21st century, 8-bit Kaypro ROM images can be found on the web, but a vintage original Kaypro II might retain more value if kept in the original stock condition. Fortunately, all modifications discussed here are fully reversible, provided the original ROM is kept and stored appropriately to protect it. Technical fact source: Kaypro Technical Manual, Sep. 1985, Kaypro part # 1484-F.

Thanks again for your time.
I think this is the right direction.

My original drives in this Kaypro II/84 are TEC FB-501 5.25" floppy drives, which are Single Sided Double Density.
The ROM version I have on the motherboard is 81-292. It is not clear if this ROM can manage double sided disks...
In the link you sent me, later Kaypro models use the same ROM and can read double sided disks... I'm confused here.

What can I do from here ?
Is it possible to create single sided/double density disks from scratch with HxCFloppyEmulator program ? If so, can you tell me how ?
Can I extract some programs from the double sided disks and transfer them to a single sided disk ?

Thanks for your help.
Top

But are you sure that the disks I can read so far are single sided ?
When I load them with HxCFloppyEmulator, it says 40 tracks/2 Sides... double sided then ?

So, I have tested all the disks and I can conclude that :

- Double sided disks can be read by my setup
- But all other disks I have found on the net or that have been sent to me by Kaypro users are recognised as Single Sided disks by HxC, and I can't read them

So I have tried :

- to create an empty HFE disk with these parameters, which seems to be the one used by working disks: 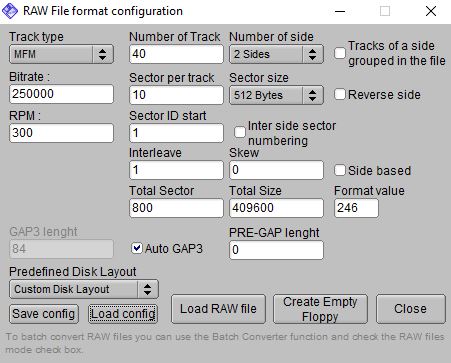 but I don't know how to add programs on this blank disks created this way.
If I test just the empty disk, It doesn't seem to work

- I though maybe I could try to load a single sided disk in HxC, then add a second side, then save the disk to make it a double sided disk, but I don't know how to do that...
Top